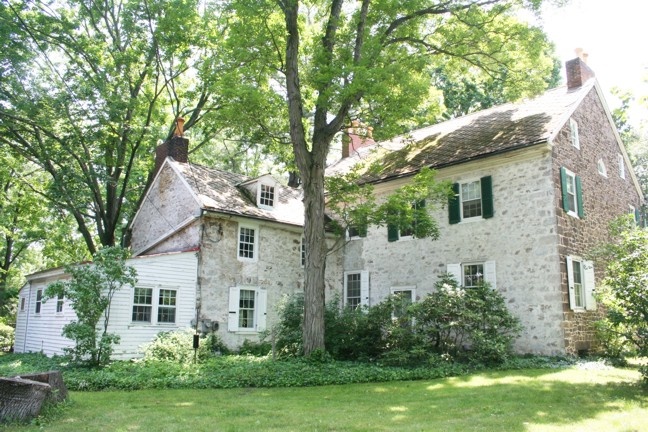 I remember a buyer once who was annoyed with me because she wanted a stone house and I sent her a plaster house. At first I was confounded, only to realize she didn’t recognize the white house as stone. And equally to the point, it seems that for many people who do recognize the plastered house as stone, it still seems like a lesser stone house if the stones are not exposed. In reality, this is a 20th century phenomenon; exposing the stone walls is beautiful to our eyes, but in the period, it would have been considered unsightly rubble. Plastered stone houses are “period”, unless the stones were hand cut (or shaped, or dressed). Then they were meant to be seen. Only the wealthiest could afford this; you’ll find dressed stones most often on estate houses, or commercial buildings. For the rest of us, plaster beautified the house.

But that’s not all. Early lime mortar was softer than the material used after the 1940s; hence, exposure to the elements took its toll. Covering the walls with plaster then a coat of whitewash gave the mortar protection for decades longer. However, there’s no doubt that exposing the stone gives us a much better vision of how the material was stacked.

Bucks and Hunterdon topography is full of stones, which I’m sure was a great headache for farmers. Dry-stacked stone walls divided their fields, and material to build houses was more than ample. When you look at a corner of a stone house, you will see alternating long and short squared-off rocks whose purpose is to give structure and support to the rubble. These are called quoines (pronounced “coins”) and you’ll always see them. If they are in the middle of a wall, that’s a giveaway that a later addition had been put onto the house. As for the rest, the fieldstone was fitted together into something resembling courses, with the soft mortar filling in the joints.

When you remove the plaster from the walls, the mortar is in terrible shape and needs to be repointed. This is a big and arduous job. Here is a picture of a wall halfway done:

You can see how smooth the joints are on the right (it’s actually a chimney). On the left of the window, not only is it hard to look at, it’s not weatherproof, either. So this is a job not to be taken on without due preparation!