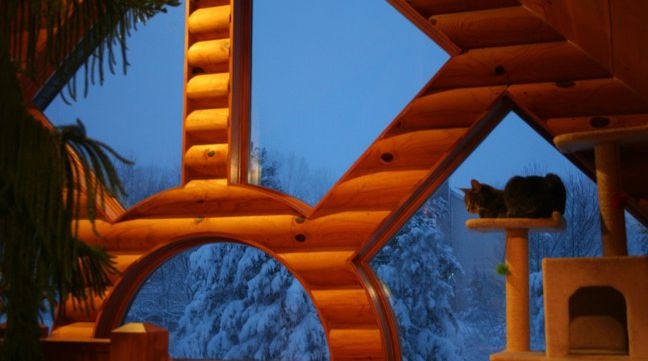 As we start to compare log homes, it quickly becomes apparent that there is much more variety than one would ever think. Not only do they come in all shapes and sizes, but the logs themselves are cut into many variations.

To start at the beginning, Bucks County is home to a substantial number of vintage log cabins—that is, from the Colonial period.

You can see a fine reproduction at the Mercer Museum in Doylestown. These were the easiest houses for early settlers to build; if you see a half-stone, half-log house from this period, you can be sure the log portion came first. They were usually a single room. One of their common characteristics is a wide layer of chinking between the logs, originally made from clay, mud, sand, or mortar mixed with horse-hair and sometimes moss. I've seen little stones inserted as well. Chinking kept the elements out for a while, but when the logs shifted and settled gaps would form and they would have to be re-chinked, especially before winter set in. Many of the older homes were built with flat, squared logs. The corners were notched, often in a triangular shape. This is the most traditional look for historic log homes.

Modern log homes came into their own, so to speak, during the last half of the 20th century. Up until the '80s, there were few manufacturers to pick from, and you will see a number of gambrel-roofed designs from that period. By the '90s, competition started popping up everywhere and the buyer had many styles to pick from—and sometimes even different species. Cedar, oak, and spruce are sometimes found, though pine remains the predominant choice, mainly because of price. Unfortunately, these homes are very expensive to build, and they pretty much priced themselves out of the market. Some of the largest manufacturers went out of business in the last ten years; the lucky ones were resurrected by the employees and dealers. As a result, you don't see as many going up these days, and purchasing a pre-owned log home is always the most economical choice rather than building from scratch.

There are two categories of modern log homes: handcrafted and milled. A handcrafted log home is just that; the logs are peeled by hand, notched by hand, and in many cases, each log is scribed to fit exactly on top of the one below. They have to be constructed at the manufacturer, labeled, then taken apart and rebuilt on the home site.

In many handcrafted homes, the logs are laid alternately, so the large end of one is stacked on top of the tapered end of another, which creates its unique appearance. If you see chinking (though not always) you are probably looking at a handcrafted log home.

A milled home will feature logs that are uniform in shape, and the logs will be cut to fit together so that they stack easily and evenly; in other words, they will be tongue-and-grooved. This keeps the air out, as well. Most homes built today are milled with round logs, and the way you can tell different manufacturers apart is by the construction of the corners.

Again, there is quite a variety of log ends, but the majority of them are called butt-and-pass. The logs are all laid on the same plane—that is, not staggered—so that the end of one log butts up against the perpendicular log on the corner. You can recognize these from the gap you will see between every other course.

Another variety is called saddle-notched. The logs are staggered when stacked; in other words, the first course will be a half-log, then the perpendicular course will be a full log, using full logs the rest of the way up. About a foot or so in from the end, a large round notch is milled for them to fit together like this:

Also, instead of tongue-and-groove, these logs are milled with a curve in the bottom of each log so one fits nicely on top of the next. This look is closer to the handcrafted corners, though the handcrafted log will be totally round and require chinking.

This is my house with the saddle-notched corners:

Some log homes will feature flat walls, using either square or rectangular logs. In many ways they resemble the historic homes, though these days they are popularly associated with the Appalachians. Their corners are usually notched, called dove-tailed. Most of the time they are chinked, though often this is merely decorative.

If you see a home with no fancy corners, it is probably built with log siding over 2x4 framing; ditto if you see logs on the outside and sheetrock on the inside (on the exterior walls). There's nothing wrong with this; in reality, it is probably more insulated than using straight logs.

Insulation? You ask. More on that in the next issue.

All photos except author's photo are Courtesy of Deposit Photos