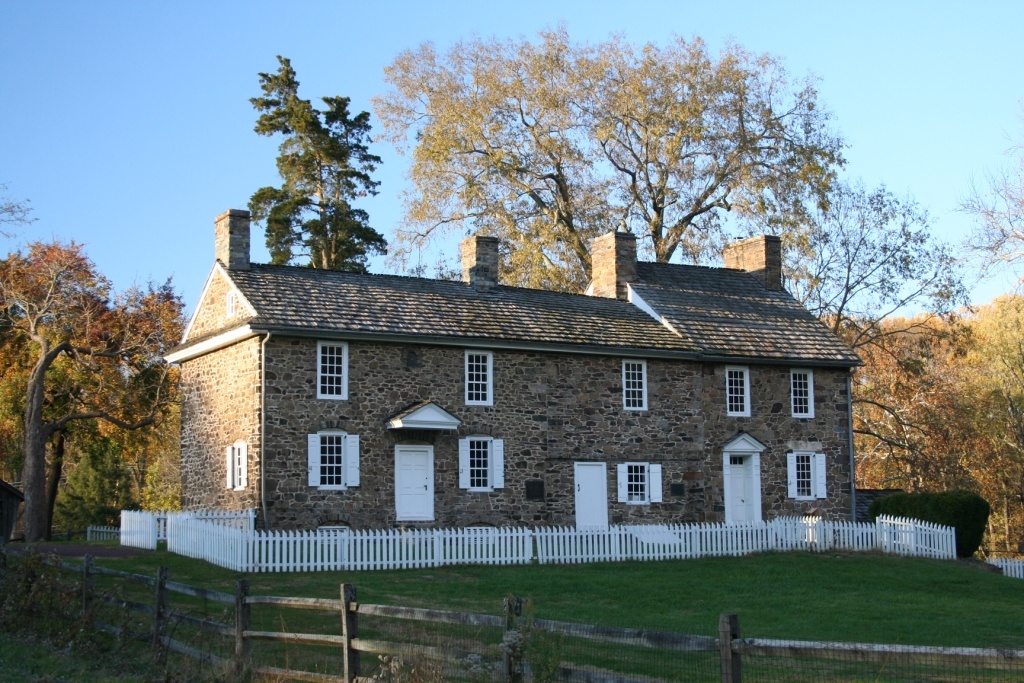 It wouldn't be too much of an exaggeration to say that people think of stone houses when they think of Bucks County—although there are numerous examples in Hunterdon County NJ as well. Since major roads from Philadelphia to New York passed through this region, there was a considerable population that settled here. They used building materials most readily at hand, the commonest—and probably the most attractive—being the soft grey limestone. Sometimes this stone is a solid grey, occasionally almost blue, and often there are traces of yellow—ranging from the palest fawn to coppery orange. Often several of these colors appear in the stone of one house; almost always it is a stone glowing with color.

The earliest settlers tended to build their first houses from native timber. These old log structures went up quickly, with squared timbers and notched corners. The chinks—or gaps between the logs—were filled with sticks, horsehair, mud and straw. After a while, concentration could be on more permanent structures. Many of these original log structures have a stone addition. The stone would have come second, after the homeowner had a roof over his head.

Most stone houses can be dated to the 18th-19th centuries. The older stone houses, simple, solid, and sturdy, fit into the landscape so well they seem as much a part of the countryside as the fields and trees. They look as though they have grown out of the very soil—and they have, for the stones were usually taken directly from the surrounding fields: hence fieldstone. Stone houses were rarely built after 1880 in this region, when easier methods of construction came into common use.

The 21st century buyer is enamored by the look of exposed fieldstone, but the traditional stone house was often covered with a coat of stucco, or plaster to conform with the fashion of the day. The purpose of plastering was threefold: first, it provided a waterproof protection against the elements; secondly, it helped with insulation; thirdly, it dressed up the structure. Houses built with square cut stone were often left unplastered, but this was for the very rich. If you are looking at a plaster house, it is probably stone underneath. The best way to tell is check out the window on the inside. Your stone house will have very deep windowsills: 18 inches or more.

Many of the stone houses in the area were originally small, two story farmhouses with two rooms on the main floor and two rooms on the upper floor, with a pie-shaped or winding staircase in the corner. Additions were completed over the generations, which would explain an extra-thick interior wall (originally an exterior wall). Many of these houses have two front doors. One of the front doors led to the parlor, which was kept pristine and rarely used except for special occasions. The other door would lead to the keeping room, where the family cooked, ate, and generally lived.

Southeastern Pennsylvania, with its original Colonial residents, is the only part of the United States that has an abundance of houses built from stone. These homes are a great part of our heritage in the Delaware River Valley, and people who live in them tend to view themselves as caretakers of historic treasures.